Hello everyone! The reason it has been so long since my last blog is because the connection we have in Haiti is not strong enough or secure enough for me to be able to login to WordPress. I have been trying to get it worked out, but I just don’t have a whole lot of time to play with it. Because of this, I have had to wait until we make trips to the US to post. Fortunately, Facebook doesn’t have the security restrictions that WordPress has, so I have been able to update many of you with the posts I often put on Facebook to see what all we have going on. However, there are also many who do not use Facebook, so I am going to sort of recap some things here for those who have not seen everything I have been posting on Facebook. I have decided to do it week by week starting with the Park Place team in early September.

God has been doing many, many exciting things in our midsts at Hope Center in Ganthier, Haiti, over the last few weeks! I will go back to the beginning of September and recap many of the things that have happened as best I can. 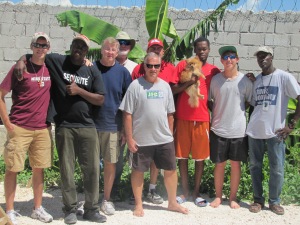 In VBS, Jeff would present the children with a very simple gospel message that they could easily remember and understand. It was a precious time for all of us.

On September 8, a team from Park Place Baptist Church in Pearl, MS, arrived at Hope Center. It always amazes and thrills me how God goes before us and knows what our needs will be long before we do. He has sent just the right people at just the right time over and over again, and this was again the case with the four men from Park Place. The game plan for this team was to do maintenance work around Hope Center in the mornings and VBS in the afternoons. In just one week, this team of men installed an automatic switch on the generator, installed a water filter for our entire water system, moved the light in the work shed to give the whole room better lighting, fixed a wiring problem in the mission house, installed several outlets in the breezeway, creating a charging station for not only tools but cell phones (this was one of the most popular things they did! Ha!), installed a ceiling fan and the dishwasher in Esther’s kitchen, and they loved on the children who recently moved into the houses on the hill in VBS every afternoon.

The generator switch was the most pressing need. Installing this would automatically convert us from city power to generator whenever the city power stops. This installation has already saved a significant amount of money on fuel costs because we are using the generators less and less. One cool thing that happened this week for me was seeing Jacob and Michael Gibbs work together to fix a wiring issue in the house. For several weeks, we were experiencing some shocking around a few outlets in our house. As a matter of fact, one wall in Jacob’s room had become so charged that he touched the wall one time and it knocked him down! Michael showed Jacob how to use a meter that checked the voltage in certain places in the house and they traced the source of the problem which was a pinched wire in an outlet in the master bedroom. Michael and Jacob fixed the problem, and then I had the privilege of watching the two of them pray and thank God for showing them the problem and allowing them to fix it safely. It was a beautiful sight seeing a Godly man take time to teach Jacob a skill that he will probably use other times in his life and then turn it into a praise moment as they gave the glory to God for their success. Michael’s obedience to God not only fixed a serious problem, but it allowed him to minister to my son in a very special way.

These four men worked so hard this week, and in the afternoon it became fun time as Jeff shared the gospel with the children in very creative ways and we played with all of the toys the men brought in recreation out in the courtyard. Each day the children would show up around 3:00 and Jacob and I would join Jeff in the courtyard for recreation. We would play frisbee, t-ball, soccer, jump rope (the jump ropes became microphones as the girls gave us concerts), and nerf football. After about 30 minutes of play, we would all go to the breezeway for Bible study. Each day, Jeff had a new story to tell the children. He started with creation and gave them a world sticker to remember that God created the heavens and the Earth. Then he gave them an apple silly band to remind them of the story of Adam and Eve and how sin entered the world. On the third day, he gave them a little kazoo after he told them about the birth of the long awaited messiah, Jesus, and how the angels rejoiced at his birth because Jesus was the son of God, born to become the ultimate sacrifice for our sins. On the fourth day, Jeff gave them a necklace that had a cross and beads that represented the gospel message. He recapped the message and told them about Jesus dying on the cross and defeating the grave as Savior of the world. On the last day, he gave them a little bottle of bubbles and showed them how when you blow on the stick, the bubbles don’t stay where they are. They float off in many directions carrying fun to others around them. This represents our job as Christians to tell others about Jesus. Once we know the good news of Jesus, we don’t need to just let it “sit around bottled up.” We need to let it spread around for others to hear and come to know and enjoy the good news as well. It was a simple message, but the kids got it! They LOVED the review time as Jeff asked them questions about the message the day before. They were eager to recount what they remembered and learned. What a blessing! They also LOVED song time. Jeff played the guitar and the kids sang songs like “Yes, Lord!” and “Lord, I Lift Your Name on High.” Still to this day the children ask me about when Jeff is coming back. He obviously made a great impression on our “Children on the Hill.”

On Sunday we went up to the village of Thoman for church. After church we sang songs with the children and they made these pictures. They loved the song “Yes Lord!”

Another big improvement the men from Park Place accomplished was installing Esther’s dishwasher and ceiling fan. The Great Bridge Team from Virginia had purchased Esther a dishwasher, but time ran out and we were not able to get it installed. The guys from Park Place not only installed it, but they hung a ceiling fan in the kitchen to help with some of the heat. A lot of work takes place in that room! These hard working teams must eat, and Esther makes sure that happens. Here is a picture of Esther beside her dishwasher in her kitchen. It is amazing how many things have happened here in just a few short weeks. It is because God sends teams specifically equipped for the work He wants done here. He not only wants to bless the people of the village of Gallet Chambon, but He wants to make the work of the teams here as productive as possible. The conveniences He has allowed to come here insure that each week is the most productive it can be. Thank you Lord for so many amazing blessings!

Here is Esther posing beside her dishwasher. This is a rare convenience in Haiti. But it allows us to clean quickly and sanitize all plates, utensils, etc. It not only makes Esther’s job a little easier, but it makes things safer as

There were many, many praise moments we shared with these four precious men. We are so thankful that God not only called them to come bless our ministry, but He equipped each one specifically for the task He wanted accomplished in this particular week. He used them to fix problems, add conveniences, and minister to the people of not only our village but the village of Thoman as well.

As I look back on the things this team accomplished, I am overwhelmed with amazement as I recognize that God does go before us! He knows our needs and He is already preparing His people to be used by Him to meet those needs. When people recognize His call and they say, “Yes! I will go!” He takes care of the rest. If you believe that God is calling you to go, don’t wait to know the details. Just say yes and he will show you when it’s time. Sometimes He reveals that purpose months before you go, and sometimes He saves a little bit of information to reveal to you once you get there. Our God likes surprises too! Either way, when you go, God will show you the purpose He has for you, and I am sure that purpose will not only bless the people you share with, but it will bless you as well.

Again, we thank these four men for their obedience and we thank God for the purpose he had for each and every one of them!