Settling in to Our New Home

Wow. What a week it has been! It seems like we have been here much longer than one week because SOOOOO much has been accomplished!! As a matter of fact, I am just now getting to blog because we have been so very busy! Every night I have tried to sit down and recount events and I am so exhausted that I just have to go to bed. Tonight I was determined to get the kitchen cleaned earlier and write a post.

When we arrived on August 2nd, Jonathan, Chris, Brianna, and John were already here and had considered helping me unpack some things from the 12 suitcases they muled over, but when they discovered how disorganized I had packed them, they decided against it. Ha! It was nice to see that they had all settled in though and were making themselves at home. We discovered a fun surprise when we looked on the dining room table and found a beautiful cross plate and candle that was left by the First Baptist Church Brandon team who was here the week before we arrived. What a precious house warming gift!! I LOVE IT!!!!

We quickly got busy unpacking, making home improvements, preparing for VBS, getting to know our first team to host – a GREAT group of folks from Great Bridge Baptist Church in Virginia, etc. Some of these team members led VBS, some helped Tony organize the clinic, and some did construction. Jonathan, Chris and Brianna and I also planted some of the seeds I brought along to begin our vegetable and herb garden! Wait until you see the before and after pictures! In three days most of them are already ready to transplant to the ground!! I can’t wait to be able to actually eat vegetables we have grown in our own garden!!! 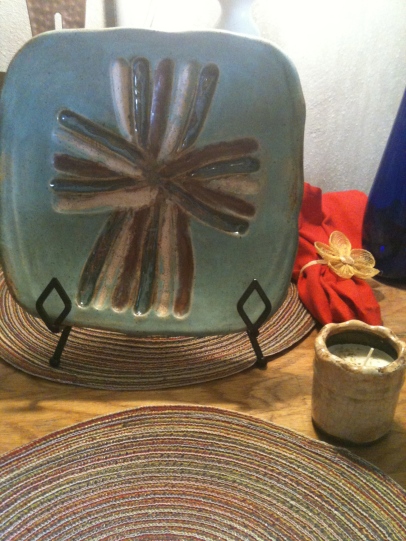 The plate and candle First Baptist Church Brandon left us. THANK YOU SO MUCH!!!

I do need to detour and share a neat story of how God’s plan is always so perfect and He knows our every need. One member of this team, Dave, had been struggling a few months ago because he really did not know what his purpose was for going on this mission trip. He knew God wanted him to go, but he had not quite settled it in his mind and heart how God was going to use him. However, once he got here, he discovered that we desperately needed cabinet work done in both our house and Esther’s kitchen. Well guess what, Dave is president of the National Cabinetry Association and, as we have discovered, is a master carpenter!! Of course, it has been quite an adjustment building cabinets Haitian style, but Dave and his apprentice Gabby (“G” for short) have worked day and night to create fantastic cabinets for both kitchens. Dave decided on Wednesday to have his flight changed from Friday to Monday so he could stay and finish the cabinets. When we started looking for flights that night, nothing was coming up! Every flight available was over 20 hours long because they wanted to take him through Panama before going to Miami!! Crazy right?! Well, that night Esther, Dave, and I prayed that God would work it out and that Dave would be able to get his work done. The next morning we found out that there was ONE seat available on a flight Monday that would have him home by Monday evening and it was less than his original flight, AND it’s First Class at no extra charge! Wow!! Our God is an AWESOME God!!

So back to recounting events….We had a WONDERFUL time with Jonathan, Brianna, Chris, and John, but we had to say goodbye to them on Thursday. I cannot tell you how hard it was for me to tell my son goodbye and send him off to college knowing I won’t see him again until November. My heart ached just thinking about it. It’s nice though to be able to still text him through iMessage and Viber and we can  just pick up the phone and call anytime as well since we have a Mississippi number! Isn’t technology amazing!? And the Lord has had me VERY busy to keep my mind off of it as well. I do want to say THANK YOU to the four of them for helping us move in here. They sacrificed a lot to do that. They drove all night to New Orleans for their flight on August 1st, then their flight home wasn’t until Thursday evening, so they didn’t get back New Orleans until 10:45 at night and had a 3 hour drive back home from there! Jonathan called me when they got home and it was 4:00 a.m. Haiti time which was 3:00 there. I know they must have been exhausted.

So the activities carried on and we had a great week with our first team to host. Tony ended up treating about 13 patients during the week even though the clinic wasn’t officially open, we built and painted lots of cabinets, the team built a house, we went into the village several times visiting people we have met throughout the week, and we had over 160 kids come for VBS! The team gave out soccer balls on the last day to every child who had been able to cite John 3:16 for one of the workers. It was quite the spectacle giving them out too! I will post a picture tomorrow of a young brother and sister, Roberto and Shayla, who not only recited John 3:16 for us again, but sang us two songs as well! Those two are adorable!!

Yesterday the team from Great Bridge left (except for Dave) and Esther and I went grocery shopping. This turned out to be an exhausting experience. We went to many stores trying to get everything on our list – both groceries and hardware – and while we were out, the guys were building shelves and cabinets. This morning, our plan was to continue the work, but Tony woke up with a terrible headache and nausea. He has only run a low grade fever once today, but he has stayed in bed all day. This became a problem early this morning when the first patient arrived as instructed for a follow up visit. I asked Tony what to do and Vladimir and I went to clinic with our first patient. I redressed his wound and we prayed for his healing. I returned to my cabinet painting, and not long later another patient arrived! I redressed her wound and asked her to come back Sunday afternoon for Tony to check it. After she left, I fixed lunch for everyone and not long after we ate, another patient arrived! This was a 70+ year old man with terrible swelling in his legs. After advising him as Tony instructed me, I prayed for him while holding one of his feet in my hands. After we prayed, he lifted his other foot and asked me to pray for it too! 🙂 Such a precious, precious gentleman. It was such a blessing ministering to him! Throughout the day, we have checked on Tony, and by this evening he did eat a few crackers and take more ibuprofen. He didn’t have any fever, so we are hoping he will be free of illness tomorrow. Please pray for him throughout the next few days and ask God to give him the strength and health to do the work God called him here to do. Thank you.

Well, it is now VERY late, and I REALLY need to get to bed. We are going to Pastor Liverance’s church tomorrow. I wish I had time to post all of the pictures I want to post to go along with this blog post, but I will have to do that tomorrow. It takes too long to upload each photo, and it’s past 3:00 a.m. now.

Thank you all so very much for your prayers!! We know it and feel it constantly.

Good night!! Enjoy the first few photos I uploaded before I decided to hit the hay!! :)………….

Here are a few pictures from the first couple of days…

Chris lounging on the couch

Jacob and Vladimir decided to go ahead and plug up the xbox and play a little FIFA. They have since played every night before going to bed. Ha! 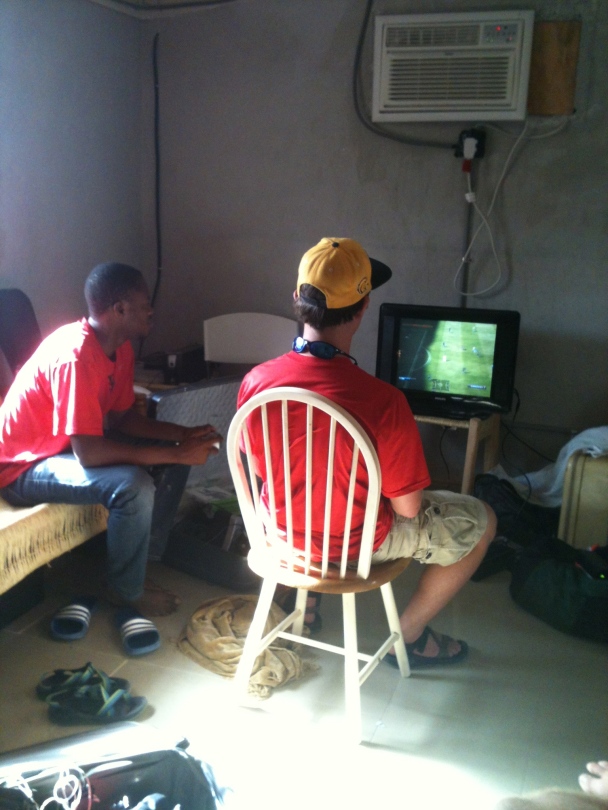 Jacob and Vladimir playing FIFA – the xbox has since been moved to Jacob’s room. They play every night now. Ha!

Brianna and John got busy making a set of shelves and the wall desk that I am now working on in our dining room. Later on in the week, one of the Great Bridge team members, Dave, added a blue formica counter top to it. It’s very nice!

Brianna and John Blackwell team up to install a wall desk and shelves in the dining room. Thanks so much!!!

7 responses to “Settling in to Our New Home”