First of all, To God be the GLORY, for the storm!! While we all watch the weather reports intently, we have 7 families on the hill up there who are rejoicing that, as the wind gusts and the rain falls, their walls are not flapping and their floor is not turning to mud!! It is as if God is saying to them, “See, I told you I would provide a safe, sound place for you….now watch this!” They are so happy to be in their new homes and fellowshipping with their other friends from the tent city who have moved out to the country with them. They are making their houses into homes, and their children are getting to know children from the village. It’s a wonderful sight to see. I do want to share about the first family that moved in. There are two teenage girls in this family and I quickly picked up on a little sadness in their faces as I met them. I asked Vladimir to help me explain to them that I know how it feels to have to leave your friends that you love and have lived with for so long and move to an unusual place. I have recently had to leave my friends and family and move thousands of miles from them to a place where I don’t even speak the language. But I assured them that God has a plan, and that we can all be thankful that He is going to bless us in this move together. As I spoke with the girls, the 15 year old’s eyes teared up and the tears spilled over and ran down her face. I knew that God had given me a discernment into her heart and I was speaking to her pain. I hugged her and kissed her on the cheek, just like I have done with so many other teens God has placed in my life, and assured her that things would be okay. About an hour later, one of her best friends arrived (below in pink) and she was a completely different person – ALL SMILES. God is so good. He knows our hearts and He prompts us to care for one another. Thank you Jesus!! Here are some faces from day one of the move:

This mother was dancing so much I could hardly get the picture. She is THRILLED to be here! God is good!

Today through Monday we will be working to help them get settled in. But God Ministries provides them with food for one month and beds. We are running low on beans and beds, so we will be heading into market after Tony gets finished seeing patients to take care of these things.

Speaking of Tony and the clinic….every day Tony has had patients show up around 8:00 for medical care. He has treated about 15 people a day. I will share a couple of stories:

One day an elderly man came in with a horrible injury to his face. He explained that his bull had charged him and cut his face with his horn. His cheek bone was swollen and he was bleeding pretty badly in three places. Tony got him all cleaned up and prayed with him. Three days later, the man returned for a check up. The swelling was down, the cuts looked as if they had occurred weeks ago instead of days, and he had a huge smile on his face. On another day, Vladimir and I had to run the clinic because Tony was in bed sick. Another elderly man came in and had terrible swelling in the feet and ankles and was hurting all over. Tony told us what to do for him and then we prayed with him. As I prayed, I held his foot in my hand and gently rubbed his ankles. When I finished, he said, “Thank you,” then put his other foot in my lap and said, “Now pray for this one too.” God bless him! He returned several days later with very little swelling, not walking with his cane anymore, and feeling much better. He too had a huge grin on his face. Then two days ago, Tony had a clinic full of people, and two of them were pregnant ladies. One of the ladies was 7 months pregnant. As Tony reported that her baby was healthy and growing, he showed her where its head was and where its bottom was. She was amazed and said, “How do you know?” Then he said, “Here, I want to show you something,” and he put the stethoscope on her belly and she listened to her baby’s heartbeat. She was absolutely AMAZED. Of course, my sweet Tony had tears rolling down his face as he listened again to the baby’s heart beating a healthy drum beat in her round belly. It was a beautiful moment, and God blessed them both. I could go on and on, but there is much more to tell…

The work began on the orphanage on August 13th as we were leaving for Cap Haitian for Jacob’s soccer games. There were about 30 men – all local men from the village who are very thankful to be working – and they were marking off the buildings with string in the dirt. When we returned from Cap Haitian on August 17th, all four foundations were formed and walls were going up on all four buildings. These men work so hard and are so productive. They enjoy their work too! Every day you can hear them down at the bottom of the hill singing and laughing and talking while they work. It’s a joy to watch and hear. I am posting a couple of pictures of their progress as of a couple of days ago. It’s amazing what can happen in just 10 days!

An update on Jacob…Jacob is catching on to this Creole language with amazing speed. He carries his book around and studies all the time. He also uses an app he has to help him with common phrases. I love hearing him and G (one of our security guards) outside laughing and talking in Creole together. He is doing fantastic and seems to be loving life here. This week, he showed out with some carpentry skills we didn’t know he had. He and Tony had started working on the shelves and bar for his closet one morning, but Tony was quickly pulled away to see patients. I went to check on Jacob, and he said he really wanted to finish the project himself, but he was afraid Dad wouldn’t want him to. I told him that if he felt confident in what he was doing and he could do it safely, then go for it! That’s all he needed. He got after that wood with the circular saw and before we knew it, he had five shelves built, the bar for hanging clothes installed, and was organizing his things in his closet. We were so proud of him. He was pretty proud too. I told him that I was going to give him a shop credit for all the work he has been doing around here. After all, he’s learning as he works, and he is doing a great job with it. He might as well get credit for it!! Ha! Jacob is also enjoying getting to know new friends around here. He took up with a kid named Bikly last week when a team was here from Virginia. Bikly is a young guy who rides up on his donkey quite often. He is very friendly and loves Jacob. A few days ago, Bikly rode up on his donkey and there was a baby donkey tagging along beside him. Jacob asked Bikly about the baby donkey, and Bikly said that his mother plans to sell it. Today, Jacob has arranged for Bikly and his mother to come talk to Tony about two things….one – about some surgery that Bikly may have to eventually have and how some members of the Great Bridge, VA, team want to help him with that, and two – about purchasing the baby donkey. Jacob wants a donkey of his own so he can ride up into the mountain area and explore with Bikly. He’s pretty excited about this pending purchase. I’ll let you know how that goes…. Ha! Another friend that Jacob has made is a guy named Jimmy. Jimmy is almost 15 and is one of the new kids who just moved in up the hill. Jimmy knows a good bit of English, so he and Jacob are able to communicate very well. They seemed to hit it off great. They exchanged phone numbers and Jacob and Jimmy text back and forth all the time now. So now Jacob walks around with not one but two phones. He has one phone to text through Kik with his American friends, and he has his Haitian phone to text with his new Haitian friends! These kids over here love to text as much as our American kids. Ha! When I posted about the trip to Cap Haitian, I didn’t have time to post pictures, so here are a few from the trip: 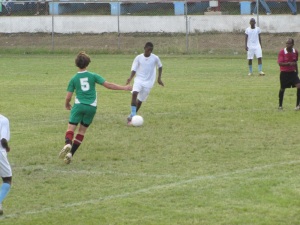 Well, that’s all I have time for today. I’ve been inside all day and I really need to get out in our garden. The garden, by the way, is growing at warp speed. We have zucchini, cucumbers, cantaloupe, tomatoes, peppers, potatoes, avocado, onions, and several herbs growing. We have already eaten several watermelons from our garden, and are also growing a pineapple, bananas, purple hull peas, and plantains. I look forward to the day when almost all of our food comes from the land we live on!

Oh, and one more thing…a report on Isaac from Haiti – All we have had today is a few gusts of wind and some spray-like rain. I hear a few rumbles of thunder in the distance, and the sky is getting pretty cloudy. It doesn’t feel like a hurricane though. We are thankful for the rain, and the sky doesn’t look threatening at all. As a matter of fact, God’s Word says that everything in creation bows down to Him who created the Heavens and the Earth. It also says that He has given us authority, through Jesus, to do all that Jesus did and more. Just as Jesus commanded the seas to become calm, we too can command this storm to dissolve. Therefore, we have commanded this storm to stay away from us. We have commanded it to dissolve in its own path and not touch a soul in this village. We are believing him for this and He is doing just that even as we speak. The last time I checked the weather channel, the storm had pushed  far to the west and is bypassing Haiti altogether. The most we are expected to get is some outer squalls of maybe 60 mph at the most. I really don’t expect to see that either. God is glorified in our prayers, in our actions, in our faith that he indeed can and will move mountains when we truly believe….and the West family has certainly seen and experienced enough to truly believe!! To God be the GLORY!! Amen!!

We love you all so much, and we thank you for following the blog. Please keep us in your prayers as well as our village of Gallet Chambonne in Ganthier, Haiti. We are very honored and blessed to be here.

2 responses to “God is Glorified”