The past few days have been excruciating. We have felt so helpless here. But “excruciating” does not even begin to describe what it has been like for people in Haiti. People are running out of food and water and gas while gangs and protestors continue to hold the whole country hostage and literally rip it apart and burn it. It is time. It is time to call upon all prayer warriors and make clear the urgency for the need for prayer. Haiti will one day be restored back to normal, and we will return to our call of ministering to the people of our village as we always have, but right now…. RIGHT NOW WE ALL MUST RECOGNIZE THE NEED TO BE ON OUR KNEES IN PRAYER!!! 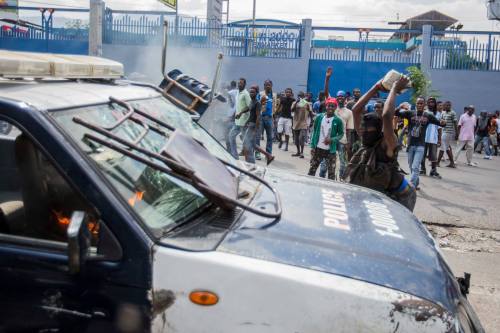 When Tony and I left Haiti on September 16th, it was starting to heat up. The day after we left, the heat turned up a bit more. By Monday, September 21, it was cranked up in full force. At this point, it is utter chaos. When things get hot like this (and this is worse than we have ever seen it), a million things start darting through my mind, but the primary concern I feel is for LyniaNara. Her life depends on being able to travel to and from Port au Prince for dialysis. When things are like this, her travel becomes impossible.

LyniaNara has a routine, and situations like this disrupt that routine and her body begins to shut down. A normal week for LyniaNara is not easy, but it is necessary for her to survive. She leaves her house at 3 am with her father to head to a dialysis center in Canapé Vert above Port au Prince every Saturday, Tuesday, and Thursday. It takes two hours to get there, four hours spent on dialysis, and another two hours to get back home. If all goes smoothly, she gets home in time to get ready for school which starts at 1. Over the last few months, her routine has gone very smoothly and she has been looking soooo healthy. She beamed with excitement the day she came to pick up her uniform for school. It was the same uniform we had made for her two years ago when she was so sick she wasn’t able to start school. She has missed two years of school because of her kidney failure. This year, it fit her perfectly except for the length. Two years…and she is as small as she was when she was 12 only taller. But the smile on her face was electrifying. It was a good day. 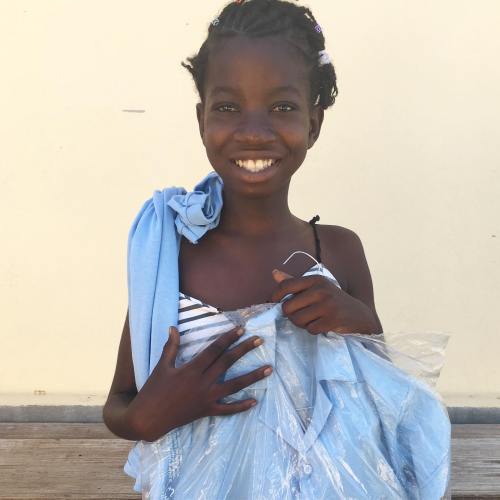 Today, however, is NOT a good day. On September 21st, I checked on LyniaNara, and her sister, Daphka, told me that she was able to get to her dialysis clinic that day with no problem. I told Daphka to let me know if they have any difficulty in the days ahead. On Sunday, Daphka texted me and said they could not find gas to prepare to go to dialysis on Tuesday. The search began for an ambulance that could go get her immediately. I was hoping this would be easy, but it was not. Most likely, if we managed to get LyniaNara to the dialysis center, she would need to stay nearby for the rest of the week so that she could return for more dialysis, so I reached out to the expat community looking for a place for her to stay. We contacted the guest house where she stayed last time the country locked down, but HERO Rescue said that would be too far from her dialysis center for them to get her there. After hours of searching and inquiring, a Haitian doctor contacted me named Dr. Junior Etienne. He works with MSPP and he began looking for a a guest house that was closer. He managed to find one that was a short walking distance from the dialysis center. Whew! This was a relief! Now to figure out how to get her there…

LyniaNara getting dialysis at Alliance the last time she was critical

All day Sunday, we worked with HERO and CAN and Dr. Etienne on trying to find someone who could get her to the dialysis center. Because of the gang that has been terrorizing anyone and everyone on the highway between Croix des Bouquet and Ganthier (our city), we could not find anyone willing to take her and we couldn’t find any ambulance service that could come out to get her. The roads were filled with debris from protests and burning tires, and gangs were shooting at any vehicle trying to pass through. 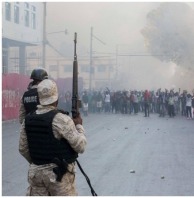 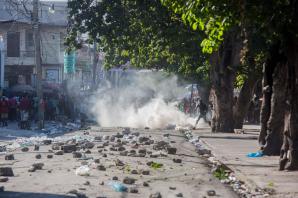 Debris in the street in Port au Prince
Everyone was paralyzed. Daphka said that LyniaNara was hanging in there, but her feet were starting to swell. Daphka went to Hope Center to ask Didier to get some lasix from the pharmacy. He got her fixed up and that bought her a bit more time…

Monday, we continued to work on finding a way to get LyniaNara to dialysis. We called HERO Rescue, CAN Ambulance Service, and even looked for possible helicopters that could come. No luck… We were hopeful when Daphka texted and said that CAN Ambulance service had called her and told her to get ready that they were going to try to come get her. I told her to go to Hope Center and ask Didier to charge her phone and give her money and food for the trip and stay at the guesthouse. He instructed her to divide up her money and hide it in various places. Reserve 5000 gds in her bag to use as bribe money in case they run into any gangs on the way demanding payment for passage. Didier took care of everything. We waited….. and waited…… no ambulance. We later found out that one of the CAM Ambulances had been ambushed while on another call and the vehicle was torn completely up. Their other ambulance had no tires left because of hitting debris in the streets. The ambulance was not coming.

LyniaNara’s health was declining rapidly. I checked back with HERO as well as Doctor Etienne and both said that the roads were just too dangerous to ask anyone to travel and it was the same on my end. We had just gotten word that Dieudonne, our orphanage administrator, had tried to go get food for the kids at the orphanage and was ambushed by the gangs as he tried to enter the highway. The truck was shot five times and windows shot out. Dieudonne managed to get away, but he had to leave the truck. The gang seized the truck.  We eventually found the truck and negotiated to get it back. We knew at that point that there was no hope of getting LyniaNara out.

This morning, I was awakened by a steady ding on my telephone as one text after another started coming through. Didier was texting me to say that LyniaNara was in bad shape. Dr. Etienne was texting me to see if we had come up with another plan. Alex, the owner of the dialysis center was texting to see if I had heard from LyniaNara. Everyone was worried and none of us knew what to do. I began to pray, “Oh God, help me figure this out! Show us the way!!” Then it hit me! We negotiated with the gang to get our truck back; perhaps we could negotiate with the gang to let us through with LyniaNara. After making some calls, we managed to get the gang to agree to let our driver pass through in our shot up truck with LyniaNara and take her as far as Croix des Bouquet. We would have to pay the gang 5000 gds to get safe passage. 5000 gds….. That is the exact amount Daphka had put in her bag for negotiation. God reminded me that He goes before us….

I called Dr. Etienne and he began making arrangements to meet our driver in our truck in Croix des Bouquet. I contacted Daphka and told her to be ready, reminding her of Isaiah 41:10 that says, “So do not fear, for I am with you; do not be dismayed, for I am your God. I will strengthen you and help you; I will uphold you with my righteous right hand.” She sent a picture of her and LyniaNara in the truck getting ready to head to Croix des Bouquet. We are now praying that God hold them all in his “righteous right hand” and give them safe passage to the dialysis center and give our driver safe passage back to Hope Center. They all must pass through very dangerous areas.

We are now calling out to everyone we know that believes in the power of God to move mountains. Please pray for their safety to get to the dialysis center. Please pray that the dialysis can restore LyniaNara to good health. Pray that the girls remain safe in the guesthouse in the days to come. Pray that Meresse and Elorge can return safely to Hope Center. THANK GOD for people like Didier, Elorge, Meresse, Dieudonne, Dr. Etienne, HERO, CAN, and countless other brave people who are doing all they can to maintain things while the country falls apart. 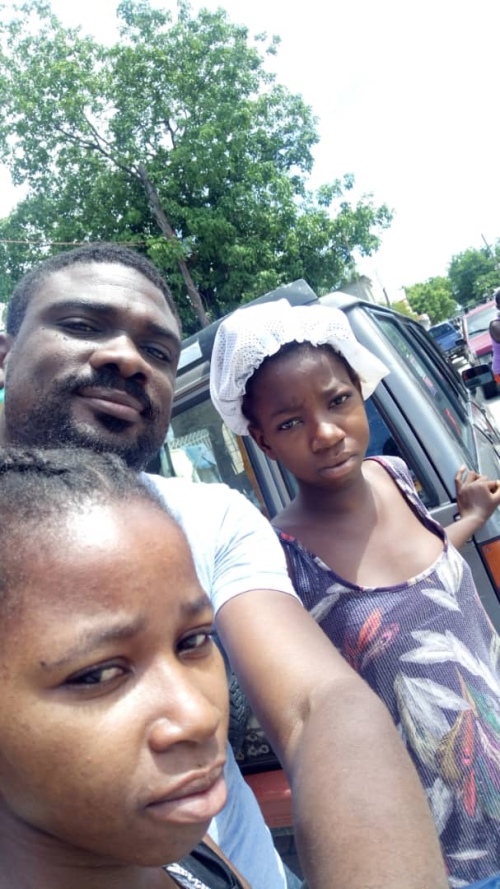 Dr. Etienne now has LyniaNara and Daphka with him and they are heading up to Canapé Vert to the dialysis center

Pray that Haiti will be restored to peace and that people can find the food and provisions they need to return to normal life. Pray for God to move over all aspects of this time of chaos in Haiti. Oh God, please move!!

We wait on the Lord and we pray and trust that order will be restored to Haiti soon and we can get back to doing what God called us all to do. Haiti is a BEAUTIFUL place with AMAZING and RESILIENT people. I look forward to the day when Tony and I can return and embrace the people who have worked so hard to maintain life as best they can in this situation. They are HEROES.

2 responses to “Negotiating with Gangs”